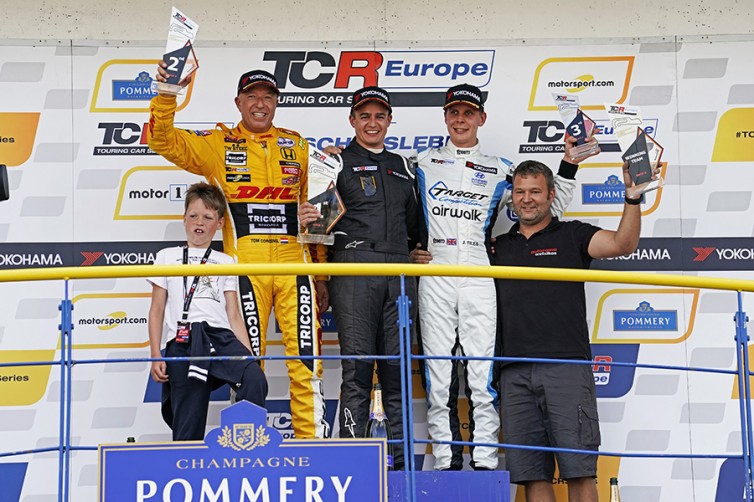 Quotes from the podium finishers in Race 2

Alex Morgan (winner): "This win is a great relief, after struggling a lot in the first part of the season. I am super happy for the team. Wolf-Power Racing has been doing a terrific job, despite being one of the smallest outfits in the series, and this win comes as a very-well deserved reward. The race was tough, but I could take a good start and pull away on a clean track. Coronel was very close throughout the entire race, putting a lot of pressure, but I tried to stay cool, not ruin the tyres and just go on. I only had one scary moment at the chicane, when we found some liquid on the track, I think it was refrigerating liquid. I almost lost the car but could recover and keep the advantage."

Tom Coronel (second): "It was a nice weekend, with two good results, I am quite happy, one needs outings like this, for the team, for the sponsors, for the morale of everybody. I could stay behind Alex since the start, I did not attack him for a couple of laps, I didn't want to kill the tyres and experience teaches you that it is better to wait and see. Unfortunately, he did not do any big mistake. Speed was there, but just not enough to make a move. It wouldn't have been very wise to risk anything, I waited to see what was possible in the very last two laps, but simply couldn't overtake him."

Josh Files (third): "We still had some small traction issues today, but not as bad. The team did a great work overnight to improve the situation, but clearly the car needs to be stripped out at the factory to see what is wrong. Still, a massive thanks to Target for the work done and to Dominik Baumann, who perfectly played his role here. Overall, an excellent weekend for our championship bid."