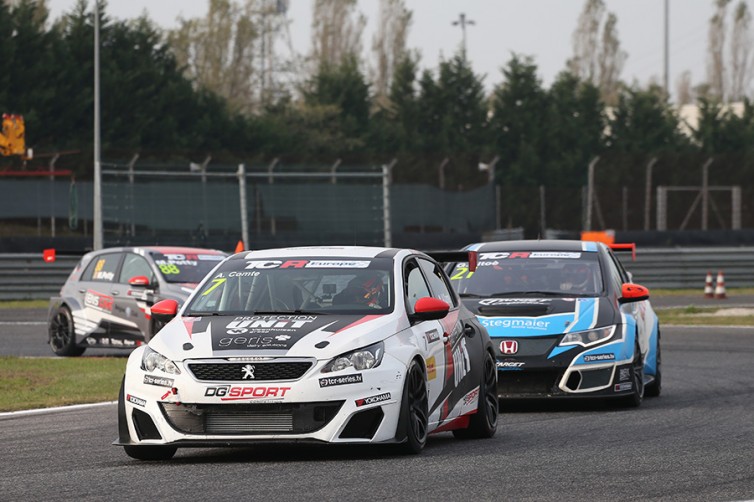 Race 2 – Tarquini wins, but Comte is the champion

In a breathtaking second race, Gabriele Tarquini claimed victory at the wheel of his BRC Racing Hyundai i30 N, but Aurélien Comte in the Peugeot 308 finished second and scored the 25 points for the TCR Europe Trophy. This was enough for him to grab the European title.
Starting from tenth of the reverse grid, Tarquini put in a great show to recover and managed to take the lead in the ninth of the 20 laps. It was not an easy task, because the fight for the lead saw a close battle between Comte, Antti Buri (LMS Racing Audi) and Maxime Potty (WRT Volkswagen), while the Target Competition duo of Josh Files and Giacomo Altoè was chasing the Hyundai.
Eventually, Tarquini used all his experience to overtake Comte, while Files took a risk to pass Potty and Buri, which he paid dearly. In fact, he was given a penalty that spoiled his chances of winning the trophy.
With Tarquini well ahead, Comte and Giacomo Altoè had a close fight for the second place that was worth the title. They finished in the order and on equal points, but Comte was crowned the champion for the better results (third and first, against Altoè’s two second places).
Giovanni Altoè took a second victory in the DSG class and won the special trophy, while Target Competition won the Teams’ Trophy.