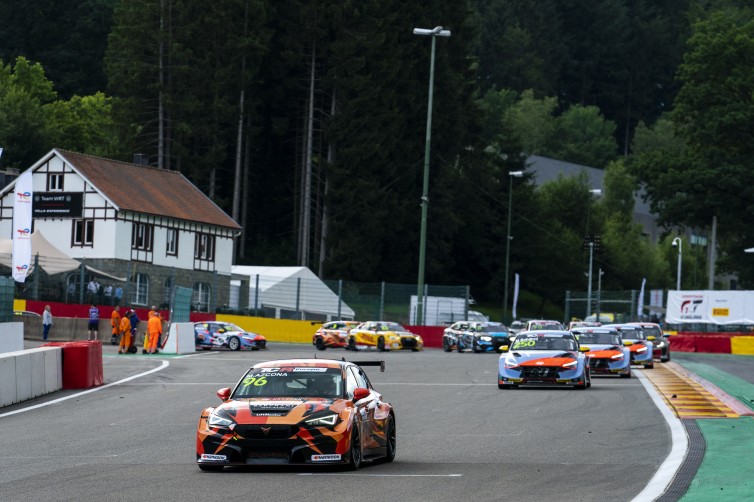 Following events at Portimão in Portugal and Le Castellet in France, TCR Europe next heads to Belgium and one of Europe’s most iconic racing circuits. Spa-Francorchamps has hosted the series each year since it launched in its current format in 2018 and, along with Monza and Barcelona, has been one of the key fixtures on the calendar for the last five years. This weekend will see Rounds five and six of the 2022 series and it promises to deliver two more fascinating races. One thing is guaranteed – there will be at least one new name on the list of Spa race winners, as none of the previous drivers to win a TCR Europe race at Spa are entered for the event.

After Mikel Azcona’s domination of the Belgian event in recent years, the Volcano Motorsport drivers must be confident of their chances. Isidro Callejas, Klim Gavrilov and Evgenii Leonov are all in the CUPRA Leon Competición cars that delivered a clean sweep of wins for Azcona last year. The similar Sébastien Loeb Racing – Bardahl Team car of John Filippi will be another to watch, particularly after two good results at Le Castellet four weeks ago.

The strongest team line-up at Spa, however, will be that of Comtoyou Racing. The Belgian outfit currently leads the Teams’ championship, with its three drivers having won one race apiece so far in 2022. Franco Girolami leads the Drivers’ series thanks to his win in Race 2 in Portimão and second place in Race 1 in Le Castellet, while Tom Coronel’s victory in the first French race means he is in second place in the standings. Viktor Davidovski won Race 2 in France and has taken maximum points in every race in the Diamond Trophy.

The only other driver to have won a race in 2022, Jack Young, will be keen to repeat his victory in the season’s opening round in Portugal, while his Halder Motorsport teammates Mike and Michelle Halder and Brutal Fish Racing’s Pepe Oriola and Martin Ryba are also hungry to give the Honda Civic Type R another win.

Currently in eighth place, the leading Hyundai Elantra N driver in the series is Target Competition’s Josh Files, with the 2019 TCR Europe champion still looking for his first podium finish of the season. His teammates Nicola Baldan and Felice Jelmini are currently in eleventh and twelfth places respectively, although both have recorded top-three finishes. The two Elantra cars of the HYUNDAI | Janík Motorsport team, driven by Mat’o Homola and Jáchym Galáš, are also yet to deliver the kind of form the team demonstrated in pre-season testing.

In the Diamond Trophy, Giacomo Ghermandi is currently in second place behind Davidovski, but Ryba is only one point behind the Italian and Leonov is just five points further adrift. New entries from the RC2 Junior Team – siblings Rubén and Felipe Fernández – are both eligible for the Diamond Trophy along with Burton Racing’s Caren Burton, while Élite Motorsport’s Marco Butti is eligible for the Rookie Trophy. All of them will be pushing hard to claim a decent points haul from the Spa-Francorchamps event.

One thing the drivers and teams cannot control, however, is the climate. The Ardennes forest has a deserved reputation of delivering extremes of weather and this weekend promises to be no different. It may be baking hot, it may have thunderstorms or it may offer intermittent rain showers, but the longest circuit on the TCR Europe calendar always delivers a tough challenge.