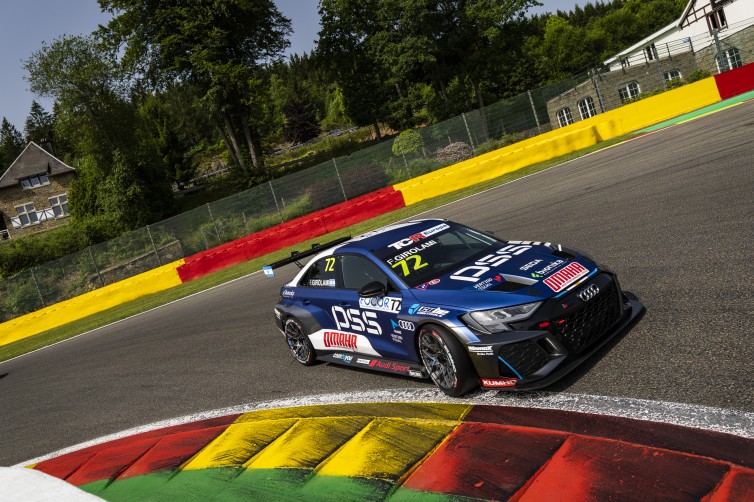 Comtoyou Racing’s Franco Girolami will start the first race at Spa-Francorchamps from pole position after setting the fastest time in this morning’s two-stage Qualifying session in his Audi RS 3 LMS TCR. It’s the first time this season that Girolami has qualified on pole and the result means the Argentinian driver has extended his lead in the Drivers’ championship. Alongside Girolami on the grid will be the Volcano Motorsport CUPRA Leon Competición of Klim Gavrilov, while it will be Jáchym Galáš on pole position for the reversed-grid Race 2 tomorrow in a HYUNDAI | Janík Motorsport Hyundai Elantra N.

The opening twenty-minute stage of Qualifying saw Gavrilov set the first competitive lap time (2:30.992) ahead of his teammate Isidro Callejas (2:31.345) and Nicola Baldan in a Target Competition Hyundai Elantra N (2:31.684), but Girolami soon went P2 with a lap of 2:31.104 before Tom Coronel in a sister Audi went quicker (2:31.002). Felice Jelmini was P4 with a time of 2:31.204. There were then no improvements among the top six before the field headed for the pits and a change to fresh tyres.

The ten-minute second stage of Qualifying was then even more hectic than usual, thanks to the longest lap of the TCR Europe season at Spa-Francorchamps effectively turning the session into a one-lap shootout. Again it was Gavrilov who was the first to set a competitive lap time (2:30.441) ahead of Baldan (2:30.659), Jelmini (2:30.749), Files (2:30.854) and Young (2:30.874) before Girolami set the quickest time of the session to snatch pole position with a 2.30.110. Callejas then went P3 with a time of 2:30.630 and so the young Spaniard will start this afternoon’s Race 1 from the second row of the grid alongside Baldan. Having delayed his start to Q2, Coronel was ninth fastest in what appeared to be a tactical move and so will start Race 2 tomorrow on the front row of the reversed grid, with the Hyundai Elantra N of Galáš on pole.

Race 1 is scheduled to start at 15.00CEST this afternoon and will be streamed live on TCR TV and the series’ social media platforms.