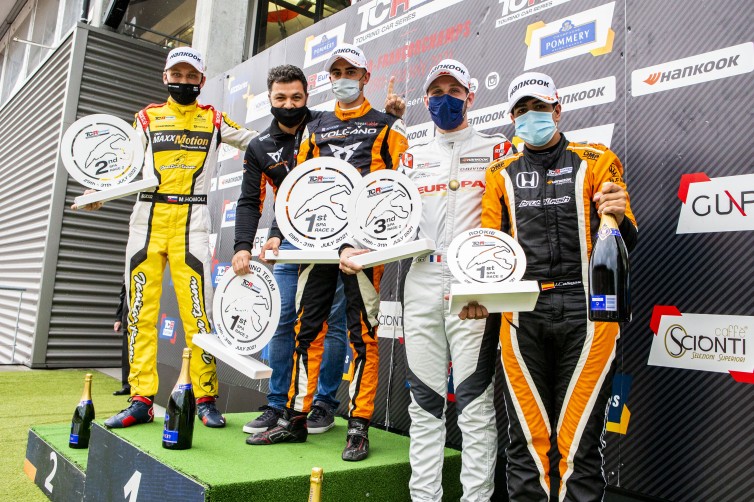 Spa Race 2: Quotes from the podium

Mikel Azcona (1st): “We did again a double victory here in Spa – I love this track, the rain and the tricky conditions! It was a good decision by my engineers to put slick tyres on the front and wets on the rear; it was the best choice, but at the end we saw that Mat’o with four slicks was much faster than me, but I made a big push in the middle sector just to make a big gap. We did it and I’m so proud of my Volcano team and CUPRA Racing, we keep pushing for the Championship. From the middle of the race, the track was completely dry except the first corner. With the combination of tyres you start to slide, so you have to turn the steering wheel to the right when you turn left! It was a very challenging race but I love these conditions because you are drifting all the time. The double victory here is good for the Championship but we can’t relax in case we get another zero points weekend after we missed Zandvoort.”

Mat’o Homola (2nd): “It’s really good, I’m super-happy with second place. Still, a part of me is disappointed that I didn’t win because I had the right tyre choice, but it’s good points after our difficulties during the season. I made a wrong choice yesterday and we made a mistake, so today is a great result and I have to say thanks to the team and to everyone who supports me. I saw after Les Combes that it was really dry, so I thought it would be okay. The first sector was still damp, so I lost a few places there in a couple of laps, so it was very tricky to get good traction. But generally, it was perfect. I knew I would have a really good advantage so I tried to be clever in the overtaking and not take risks because I didn’t want to risk a penalty.”

Teddy Clairet (3rd): “It’s always difficult when it begins to rain when you are on the starting grid. We made what I thought was a good tyre choice. Mikel was a bit faster than me and so I didn’t want to fight too much with him because I didn’t want to lose too much time. In the end, it was impossible to hold Mat’o who was on slicks; I tried but it was not enough. Still, I’m happy to finish third. It’s another podium and in this kind of race, anything can happen. It’s good to take the points and finish on the podium, so I’m happy with that. When I saw Gavrilov was on rain tyres and on the first laps when we were behind the safety car, I knew it would be difficult for him because most of the circuit was dry, so I wasn’t surprised when I saw him go into the pits. I was a bit worried that my tyres would be okay, but everyone around me was the same, so I said to myself ‘we will see where we are at the end’ and it was okay.”