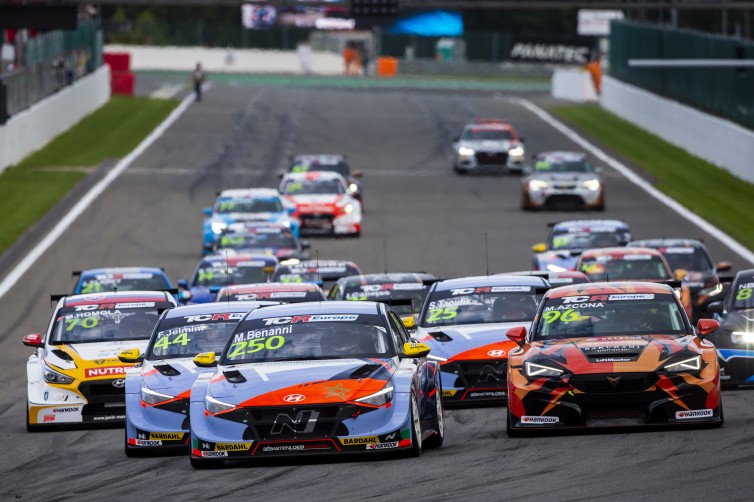 Following the five-week summer break since the previous event at Spa-Francorchamps, TCR Europe resumes at the Nürburgring this weekend, with the German event signalling the start of a packed finale to the 2021 season that will see three race meetings – six races in all – crammed into a similar five-week timeframe.

Thanks to his pair of race victories in Belgium, Mikel Azcona has retaken the lead of the Drivers’ championship; the Spaniard now leads Franco Girolami by thirty points, with Mehdi Bennani in third place a further seventeen points behind the Argentinian driver and fourth-placed Niels Langeveld another twenty points adrift. However, mathematics rather than simple race results will play an important part in deciding the 2021 Drivers’ title, as a rule change ahead of this season means drivers will drop their two weakest results. Azcona missed the Zandvoort event thanks to a clash with his commitments in the brand new Pure ETCR series, which accounts for his two dropped zero-points scores.

While Azcona and his Volcano Motorsport team will be working out the points permutations, things are just as complicated for his championship rivals. Girolami currently stands to drop a total of 25 points thanks to a string of consistent results throughout the season while Bennani, the reigning TCR Europe champion, will only drop 7 points thanks to a DNF in Race 1 at Le Castellet. Like Azcona, Langeveld will lose no points as he recorded two zero scores (in Slovakia and France) and so the situation is actually slightly different than the current points tally suggests. Depending on the results from the two races in Germany, the gaps will become even tighter as the series heads for its final two events at Monza and Barcelona, with 90 points potentially on offer from each race weekend.

So far this season, Azcona is the only driver with more than one race victory to his name, with Girolami, Bennani, Tom Coronel, and Teddy and Jimmy Clairet all having recorded race wins. Aside from the battle for the Drivers’ title, several other drivers have shown potentially race-winning pace this season and so the likes of Nicolas Baert, Jack Young, Felice Jelmini and Langeveld will be keen to add their names to the list of race winners. Baert currently leads the Junior championship standings while Isidro Callejas leads the Rookie class and Martin Ryba the Diamond category. Sébastien Loeb Racing currently has a 101-point advantage over Comtoyou Racing in the Teams’ championship.

This weekend will be the first time that TCR Europe will have visited the Nürburgring, with the series returning to its traditional timetable after the Spa 24H event. Another notable first is the maiden appearance in the series of TCR Eastern Europe competitor Łukasz Stolarczyk in an Audi RS 3 LMS.