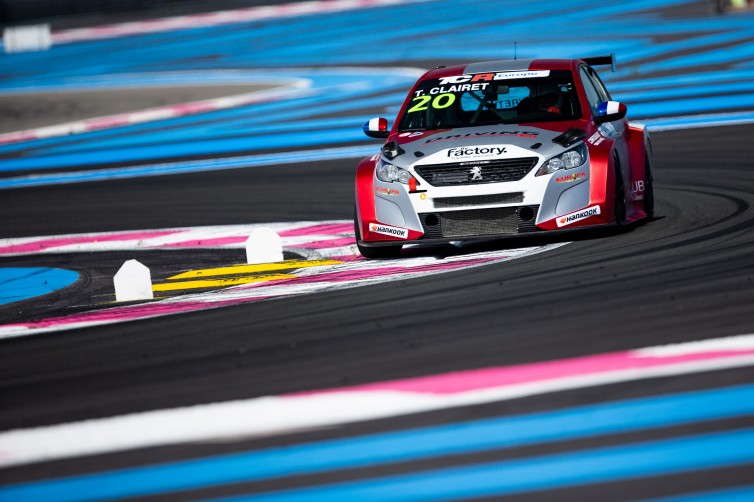 Teddy and Jimmy Clairet fastest for Peugeot in FP1

The two Team Clairet Sport Peugeot 308 cars emerged from the first Free Practice session at Le Castellet in the top two positions, with Teddy Clairet edging out his brother Jimmy by just 0.016 second. The Sébastien Loeb Racing Hyundai Elantra N of Niels Langeveld was third fastest, a further 0.091 behind.

Teddy Clairet made his intentions for his home race weekend clear on the very first competitive lap of the session, when he set the quickest time so far of 2:17.939. The Comtoyou Audi RS 3 LMS of Tom Coronel was briefly at the top of the timing sheet when the Dutch driver set a time of 2:17.148 on his third lap, but Teddy Clairet struck back a few moments later with a 2:15.978. Teddy then steadily improved his times over the remainder of the half-hour session and never dropped from P1, ending FP1 with a best lap of 2:14.531

Behind the Peugeot, meanwhile, there was a steady stream of cars swapping positions. Jimmy Clairet posted a 2:16.971 to go P3 behind his brother and Tom Coronel, only to be swiftly relegated two positions by Mehdi Bennani’s Hyundai Elantra (2:16.825) and the Audi RS 3 LMS of Dušan Borkovič (2:16.502) before Franco Girolami set a 2:15.765 and Viktor Davidovski a 2:15.855 in the two PSS Racing Honda Civic Type-R cars.

Times continued to improve as the session progressed, with Niels Langeveld (2:15.645), Jack Young (2:15.491) and Girolami (2:14.956) taking it in turns to occupy the positions immediately behind Teddy Clairet. In the closing seconds, Langeveld twice improved on his lap time to finish the session in third place, while Jimmy Clairet posted a time of 2:14.547 to end up in P2. Just before the chequered flag fell, Klim Gavrilov posted a time of 2:14.944 to edge Tom Coronel out of the top five places.

Teddy Clairet (fastest): “This is a great way to start the weekend, even if it is only Free Practice. At the Slovakiaring, we had a bad weekend with some mistakes and some bad luck and so we hope to do well here. As I said, it’s only Free Practice so it’s important to do the same in Qualifying and the races. If there is one track in the season that I know better than any other, it’s here. Otherwise, being at home is the same for me as for all the others; it doesn’t change anything and I just want to do well. It’s important not to stay in a bad feeling after you have a weekend like we did in Slovakia. I’ve spent time thinking about it, but this is a new weekend and we will concentrate on having a much better result.”

Free Practice 2 is scheduled to start at 16.40 CEST. Live timing will be available via the TCR Portal tcr-series.tv