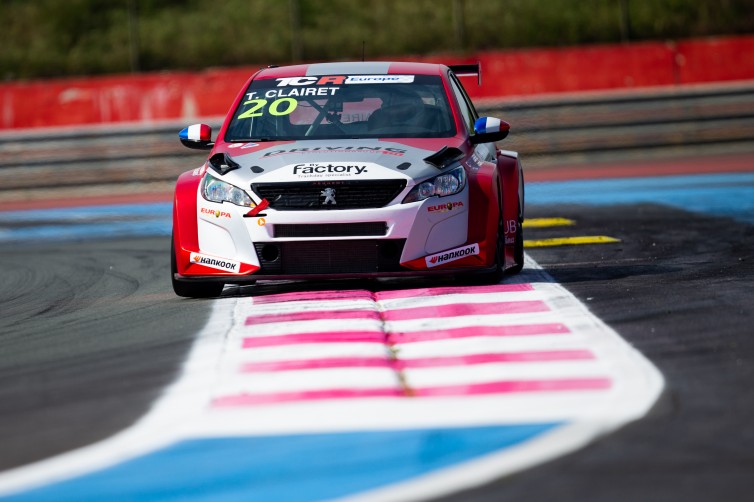 Teddy Clairet, driving a Team Clairet Sport Peugeot 308, will start Race 1 at his home event from pole position after the French driver set the fastest time in this morning’s two-stage Qualifying session. Alongside Clairet on the grid will be the Sébastien Loeb Racing Hyundai Elantra N of the reigning TCR Europe Champion Mehdi Bennani, while the reversed-grid front row for tomorrow’s Race 2 will consist of the PSS Racing duo of Viktor Davidovski and Franco Girolami.

In Qualifying 1, it was the three Comtoyou Racing Audi RS 3 LMS cars of Tom Coronel, Dušan Borkovič and Nicolas Baert which topped the timesheet after the first flying lap, but the three would soon drop down the order and none of the three would make it into Q2. On the following lap, Bennani, Mikel Azcona and Sami Taoufik all went quicker than the three Comtoyou drivers, with Teddy Clairet then going quickest with a lap of 2:13.021.

In Q2, Teddy Clairet set his best time of 2:12.615 on his first competitive lap, leaving the other eleven drivers scrambling to beat him for the remainder of the ten-minute session. Teddy’s brother Jimmy went P2 with a time of 2:13.174 but was immediately beaten by Jelmini with a 2:12.973 and then Bennani (2:12.837). Langeveld was P4 (2:13.139) but was soon pipped by his teammate Taoufik with a 2:12.901 to leave the four Hyundai Elantra N cars in second, third, fourth and fifth positions and Jack Young in sixth with a best lap of 2:13.161 in the Brutal Fish Racing Honda Civic Type-R.

Mikel Azcona looked to have gambled on leaving his bid for pole until the very last minute, but the gamble failed. Only eighth fastest behind Jimmy Clairet with a lap time of 2:13.312, the 2018 TCR Europe Champion will start Race 1 from the fourth row on the grid, but will be on the second row for Race 2.

During the second part of the session, both Bennani and Taoufik had lap times cancelled for track limit infringements, while in Q1 Klim Gavrilov was judged to have committed a dangerous manoeuvre when he crossed the pit entry line and so the Russian driver received a three-place grid penalty for Race 1. The happiest team in the paddock, however, was Team Clairet Sport. After a disappointing opening weekend in Slovakia three weeks ago, Teddy Clairet will be on pole for the opening race in France while his brother Jimmy will be alongside Azcona for Race 2.

Race 1 is scheduled to start at 16.40 CEST and will be streamed live on TCR TV and the series’ social media platforms.