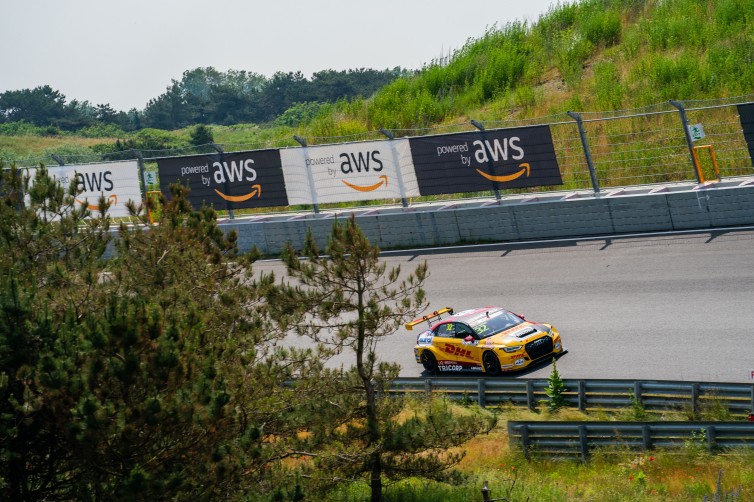 Tom Coronel, driving a Comtoyou Racing Audi RS 3 LMS, set the fastest time in Free Practice 1 at his home track of Zandvoort ahead of tomorrow’s Qualifying session and the weekend’s two races. Coronel’s teammate Dušan Borkovič was second quickest, a mere 0.168 slower than his colleague, while the PSS Racing Honda Civic Type-R of Franco Girolami was third quickest, a further 0.108 adrift.

The first driver to post a competitive lap time was Mat’o Homola in one of the two Janik Motorsport Hyundai i30 N cars, who set a time of 1:48.000 on his first flying lap and improved it with a 1:46.865 on the next. Nicolas Baert (Comtoyou Racing Audi) was second with a 1:46.894 and reigning TCR Europe champion Mehdi Bennani (Sébastien Loeb Racing Hyundai Elantra N) was third with a 1:47.392.

Baert briefly went P1 with a lap of 1:46.633 while Homola’s teammate Jáchym Galáš went quicker than Bennani with a 1:47.090. The middle ten minutes or so of the thirty-minute session then saw a range of drivers setting fast times, with Coronel going fastest of all on his fourth lap with a 1:45.751 and then twice improving to finish the session with a 1:45.476. His compatriot Niels Langeveld had also briefly been P1 with a time of 1:46.053 but would end up as fourth fastest with a best lap of 1:45.999. The Honda Civic cars of Jack Young and Franco Girolami set times within the top three, with Girolami improving to P2 at one point before being edged out by Dušan Borkovič with just under six minutes of the session remaining.

The session was red-flagged with only a handful of seconds remaining after Leonov’s CUPRA clipped a tyre stack on the inside of Turn 12, knocking the tyres onto the track.

Free Practice 2 is scheduled to start at 16.40 CEST. Live timing will be available via the TCR Portal tcr-series.tv