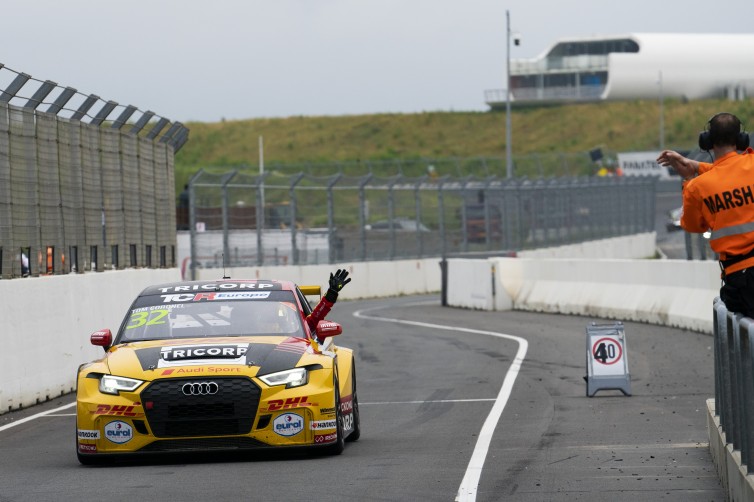 Pole-sitter Young made a good start, but it was the Audi of Nicolas Baert that made the best getaway, gaining two positions to sit in second place behind Young going through Turn 1. Further back, the Hyundai Elantra N of Niels Langeveld passed Jimmy Clairet for sixth place on the opening lap, which soon became fifth as Langeveld’s teammate Mehdi Bennani dropped two places on Lap 2.

There was drama on Lap 3 when Coronel went to pass Baert for P2 through Turns 9 and 10. The pair made contact and Coronel then dropped behind Borkovič when he mistakenly pressed the speed limiter button while trying to radio the team. Young, meanwhile, was opening up a healthy lead while the three Audi cars were battling amongst themselves. Bennani’s race was going from bad to worse; the reigning TCR Europe champion was dropping back still further and was now outside the top ten. The timing screens announced that the incident between Coronel and Baert was under investigation.

On Lap 4, Coronel passed Borkovič for second place and began his pursuit of the race leader. Within three laps, Coronel had closed to within half a second of Young and was clearly pressuring the British driver into making a mistake. The inevitable happened at Turn 9 on Lap 8 and Coronel seized his chance to dive up the inside of the Honda to take the lead. Langeveld, meanwhile, passed Baert for P4 on the same lap.

On the next lap, Franco Girolami also passed Baert for P5 and the Argentinian driver began to set his sights on Langeveld, who also had ideas about passing Borkovič for the final podium place and so the scene was set for a thrilling final few laps.

Young’s bid for victory was fading with each lap and the teenager would eventually finish just over 1.8 seconds behind Coronel. Langeveld seemed to be catching Borkovič, but the Audi was able to hold off the Hyundai to finish third by just under three-tenths of a second. Girolami was fifth, a further second adrift.

Coronel’s victory means the first five races of TCR Europe this season have been won by five different drivers, with both Young and Borkovič recording their first podium finishes of the season. Jack Young also won the Junior class, while his teammate Isidro Callejas finished the races as the highest-placed Rookie driver and Viktor Davidovski won the Diamond class.

Race 2 is scheduled to start at 13.10 CEST on Sunday and will be streamed live via TCR TV and the series’ social media platforms.