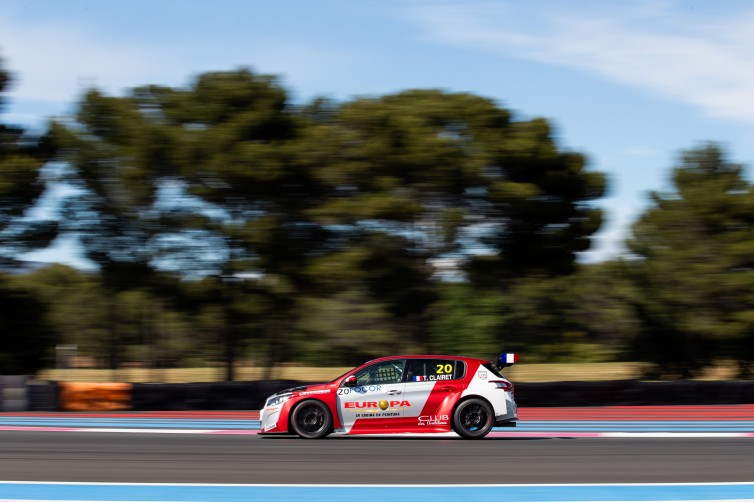 Teddy Clairet took a lights-to-flag victory in Race 1 at his home event in Le Castellet and, together with his brother Jimmy finishing third, the result was the perfect way for the Clairet Sport team to forget the disappointing opening weekend of the 2021 TCR Europe season in Slovakia three weeks ago. Sandwiched between the two Peugeot 308 cars was the Sébastien Loeb racing Hyundai Elantra N of Felice Jelmini.

At the start, Teddy Clairet made a great getaway from pole position but alongside him Mehdi Bennani made a poor start from P2, being passed on the run down to Turn 1 by his teammate Jelmini, Jimmy Clairet and the CUPRA of Mikel Azcona which had started from eighth on the grid. There was more bad news for the Sébastien Loeb Racing team as Sami Taoufik’s race ended on the opening lap after the young Moroccan driver ran wide at Turn 2 after a possible contact in Turn 1. There was also contact between Isidro Callejas, Viktor Davidovski and Franco Girolami in Turn 6 although the Stewards decided to take no further action.

With Teddy Clairet starting to pull away, a number of battles quickly developed behind the Peugeot. Azcona and Bennani were battling for fourth place, with the Hyundai passing the CUPRA on Lap 2 only for Azcona to re-take the position on the following lap and Callejas pulling up, possibly as a result of damage incurred in the incident on the opening lap. Shortly afterwards, Niels Langeveld passed both Bennani and Azcona to leapfrog the pair and go from P6 to P4 and Bennani passed Azcona once again. That began a series of furious battles between the three, who became four when the Brutal Fish Racing Honda of Jack Young closed up on Azcona on Lap 5.

As those battles raged on, Bennani passed Langeveld on Lap 5 and Young found a way past Azcona on the following lap, although the Spaniard regained the position on Lap 8 with the pair making slight contact as the CUPRA muscled its way past the Honda. Jimmy Clairet, meanwhile, was steadily catching Jelmini who was soon having to defend second place. Also on Lap 8, Bennani’s race was effectively ended by a front puncture which saw the Elantra forced to head for the pits.

Over the final few laps, Young again passed Azcona for fifth place and this time there was no way the 2018 TCR Europe Champion could retaliate, despite a last-gasp bid to pass Young on the final lap. There were no other late position changes and so Teddy Clairet crossed the finish line with a gap of over four seconds to Jelmini with Jimmy Clairet a further 1.51 seconds behind. Behind the podium places, Langeveld finished fourth, Young was fifth, only 0.185 second ahead of Azcona, and Girolami, Davidovski, Evgenii Leonov and Tom Coronel rounded off the top ten. After the race, however, the Stewards imposed five-second penalties on both Leonov (dropping him to tenth) and Martin Ryba (dropping him from 11th to 16th) for causing a collision and not respecting track limits respectively.

Race 2 is scheduled to start at 12.40 CEST on Sunday and will be streamed live via TCR TV and the series’ social media platforms.