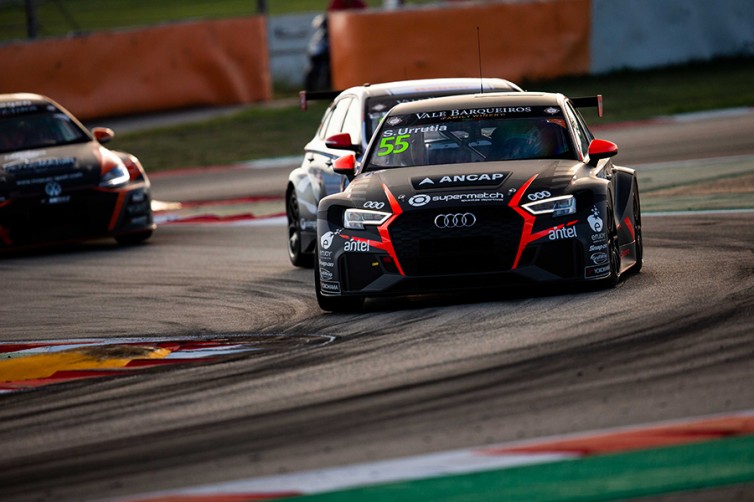 Urrutia sets the pace in the Practice 2 at Barcelona

Santiago Urritia confirmed that the Audi RS 3 LMS car is the fastest car on the Circuit de Barcelona Catalunya. After setting the second best time in Practice 1, behind his fellow Audi driver Gilles Magnus, the Uruguayan topped the timesheet in the second session.
Actually he was the only driver capable of completing a lap in less than 1:54 and his fastest time of 1:53.960 posted five minutes before the chequered flag was four tenths faster than Josh Files’ 1:54.377.
The first significant lap time was set by Andreas Bäckman (1:54.881) who improved twice (1:54.779 and then 1:54.637) to eventually rank sixth. Dominik Baumann was third fastest behind Urrutia and Files, followed by Nelson Panciatici and Julien Briché.
Daniel Lloyd, Mat’o Homola, Jimmy Clairet and Gilles Magnus rounded out the top-ten who were all covered by eight tenths of a second, while Jessica Bäckman was 11th fastest ahead of the impressive newcomer Jack Young, 12th in the Vuković Motorsport Renault Mégane RS (1:54.786).

Urrutia declared: “We’ve been really strong until right now. I feel that we were a little slow in the first session, and I knew I could improve the car and my driving because I haven’t driven here for something like five years. We made a few changes and I did a good lap and we finished up P1, so I’m very happy. Tomorrow will apparently be very wet, so it’s going to be another game tomorrow but I feel really good because I know the car is fast.”

Just like in Practice 1, Evgenii Leonov led the TCR Ibérico field in 16th position, as he was faster than Francisco Mora by a bit more than one tenth.
Track action will resume tomorrow morning with the Qualifying at 11:15.