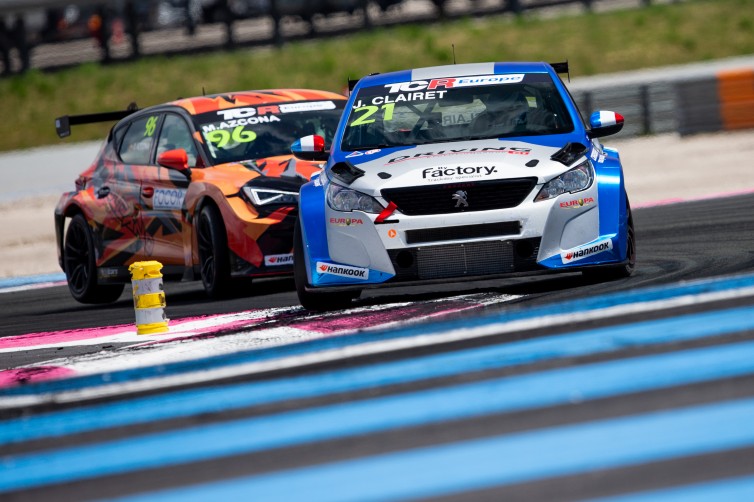 Following Teddy Clairet’s maiden TCR Europe victory in Race 1 at Le Castellet, his brother Jimmy repeated the feat in Race 2 to give Team Clairet Sport a perfect weekend at their home round of the series. 2018 TCR Europe Champion Mikel Azcona had to settle for second place after fighting for the win for the entire ten-lap race while an audacious overtaking move helped Sami Taoufik finish in third place for another French team, Sébastien Loeb Racing.

Just as in yesterday’s Race 1, the start proved to be critical. Pole-sitter Viktor Davidovski and his PSS Racing teammate Franco Girolami, who’d started from P2, were both beaten to Turn 1 by Azcona. Jimmy Clairet, however, dived past the trio going into Turn 2 to move into the lead and from then on the Peugeot driver never looked back. Clairet and Azcona quickly began to pull away and would spend the rest of the race scrapping for the lead, with a delighted Clairet holding off the challenge to record his first TCR Europe win.

Further back, Lap 1 saw Jáchym Galáš outbrake himself going into the chicane on the Mistral Straightand dropped behind the Audi of Klim Gavrilov, who’d started from the back of the grid following an engine change. At the start of Lap 2, Teddy Clairet headed into the pits while the end of the same lap saw Niels Langeveld attacking Davidovski out of the final corner with the Hyundai overtaking the Honda on the run down to Turn 1.

The next few laps witnessed a string of passing moves. Along with Langeveld moving up to P3, Jack Young (Brutal Fish Racing Honda Civic Type-R) soon also passed Davidovski for P4 and no fewer than three Hyundai Elantra cars were ganging up on Franco Girolami. The four ran in a train down the Mistral Straight on Lap 4, with Taoufik picking the perfect line to pass three cars in a single manoeuvre around the outside going into the Signes corner.

Contact between Langeveld and Young while scrapping for P3 then saw both cars forced to retire, with Young pulling off the track and Langeveld limping back to the pits. Several battles then emerged, with the fight for the lead continuing and Bennani passing Jelmini for P6 on Lap 7. Thanks to the retirements, the Comtoyou Racing Audi RS 3 LMS of Dušan Borkovič was now up to twelfth place and his teammate Tom Coronel passed Mat’o Homola for ninth place on the penultimate lap with Taoufik denying Davidovski a podium finish when the Hyundai passed the Honda for P3.

Despite the close attention from Mikel Azcona for the entire race, Jimmy Clairet held the Spaniard at bay to take his maiden TCR Europe win by 1.142 seconds. Third place for Taoufik meant the young Moroccan finally got his 2021 title bid started after a disappointing weekend in Slovakia. Davidovski finished fourth ahead of his teammate Girolami and Bennani, Jelmini, Isidro Callejas, Coronel and Homola occupied the remainder of the top ten places.

The TCR Europe series next moves to Zandvoort in The Netherlands for Rounds 5 and 6 over the weekend of June 19th/20th.