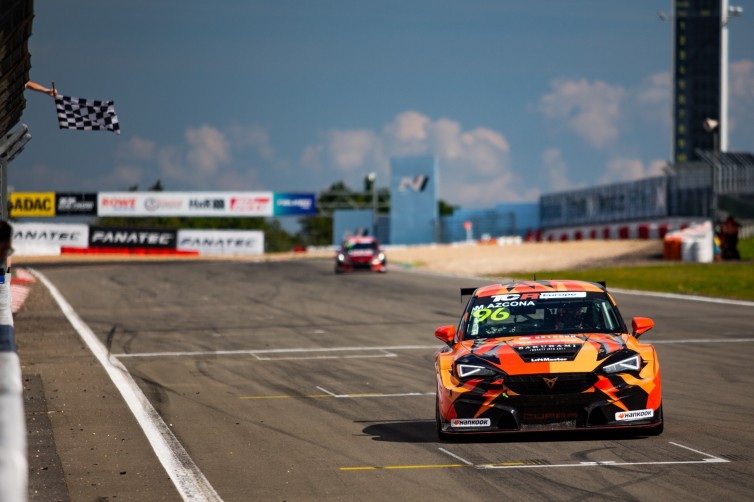 Spain’s Mikel Azcona took his second win of the weekend – his fifth of the season – in Race 2 at the Nürburgring, beating his closest Championship rival Franco Girolami by 3.618 seconds. After a penalty was given to Teddy Clairet for an overtaking move on the final lap, Jack Young was classified third and so completed the podium places.

At the start, Jack Young, who started the race from pole in the Brutal Fish Racing Honda Civic, was first to Turn 1. Viktor Davidovki made a poor start from second on the grid and was passed both by Jáchym Galáš and by a hard-starting Mikel Azcona; the Volcano Motorsport CUPRA had already made up two places on the grid by the first corner. There was then contact between Davidovski and Galáš coming out of Turn 3, with the PSS Racing Honda half-spinning in the following corner and dropping out of the top ten. This meant that Franco Girolami was up to P4 after starting from the fifth row of the grid.

On Lap 2, Girolami passed Galáš for third place going into Turn 1 while Azcona had closed up on Young. On the next lap, Azcona easily passed Young to take the lead with Girolami then diving up the inside of Young at the same place on the following lap to move into second place. It then seemed as though we were set for a repeat of the great battle between Azcona and Girolami that we saw in Race 1, but it turned out that both drivers were able to open up healthy gaps and so that battle never materialized.

Behind the leaders, however, there were some thrilling scraps further down the order. On Lap 4, Niels Langeveld and Nicolas Baert both passed Isidro Callejas for P7 and P8 respectively, while Dušan Borkovič also tried to pass the young Spaniard but Callejas held the position. There was also a four-way fight going on just outside the top ten, with Davidovki going sideways on Lap 5, allowing Sami Taoufik to move up into twelfth position.

On the following lap, Young was starting to defend his third place from the Hyundai i30 N of Galáš, with Teddy Clairet’s Peugeot 308 and the Audi RS 3 LMS of Klim Gavrilov also within striking distance. When Galáš attacked Young on Lap 8, Teddy Clairet saw a gap and passed Galáš for P4. Gavrilov then ran wide, which meant Niels Langeveld could pass for sixth place. Galáš briefly nosed ahead of Clairet again on Lap 9, but left the door open a fraction and Langeveld was able to move up another place. Borkovič, meanwhile, finally passed Callejas for ninth.

On the final lap, with both Azcona and Girolami on course to finish first and second, Teddy Clairet muscled his way past Young to take the chequered flag in third place. After the race, however, the Stewards handed the French driver a penalty that dropped him to seventh, which meant Young could claim a podium finish in third with Langeveld fourth, Galás fifth and Gavrilov sixth. Mat’o Homola and Felice Jelmini failed to finish the race while Tom Coronel was a non-starter thanks to his media commentary duties at Zandvoort for Dutch television.

The result means Azcona extends his lead in the Drivers’ championship over Girolami to 37 points, with Langeveld now a further 51 points behind. Two more events remain, so 180 points are still potentially available from the two Qualifying sessions and four races.

The TCR Europe series next heads to the iconic ‘Temple of Speed’ at Monza in Italy for its penultimate event over the weekend of September 25th and 26th.