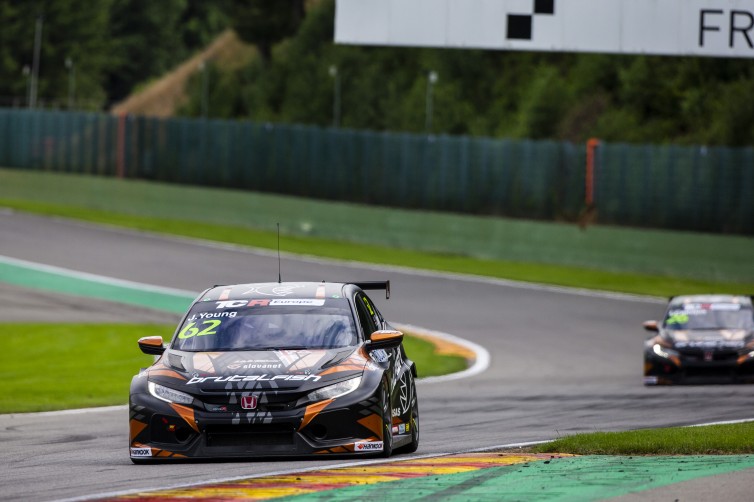 After PSS Racing’s Franco Girolami went fastest in Free Practice 1 earlier today, another Honda Civic Type-R was quickest in FP2. This time, the honours went to Jack Young from the Brutal Fish team, with the 2018 TCR Europe Champion Mikel Azcona again forced to settle for second-best. Girolami was third fastest ahead of Young’s teammate Isidro Callejas while the top five was rounded off by the Comtoyou Racing Audi RS 3 LMS of Nicolas Baert.

The pace quickened still further as the clock ticked past five minutes to go. First Jack Young set a time of 2:30.630 to go fastest with Callejas going third quickest with a 2:31.054, although the Spanish teenager was immediately pipped by Girolami who set a 2:30.824. Young then improved his time by six-hundredths of a second to end the session on 2:30.624, beating Azcona by just 0.046.

Just as in FP1, a number of drivers had laps deleted for repeated track limit infringements. Among them were Azcona, Baert, Jimmy Clairet and Martin Ryba.

Jack Young (fastest): “We were fast in FP1 but we didn’t really have the car where we wanted to be. We made a few changes and basically got everything spot on for going into tomorrow. This isn’t Qualifying, so we’ll see how it is tomorrow; anything can change in the heat of the moment. For today, very well done to the team; I don’t want to say too much about tomorrow in case I jinx myself! I don’t think things will be drastically different but I do think things will be a little different. In FP1 we didn’t put any new tyres on - that was the first time trying that, so we just practiced our strategy for Qualifying and so on. When we tested here, new tyres didn’t make that much of a difference, but it seems they do now. I guess it’s just the way the track is on the day.”

Qualifying is scheduled to start at 12.30 CEST tomorrow, with Race 1 at 18.30. Live timing will be available via the TCR Portal tcr-series.tv and both Qualifying and Race 1 will be streamed live on the TCR Europe social media channels.