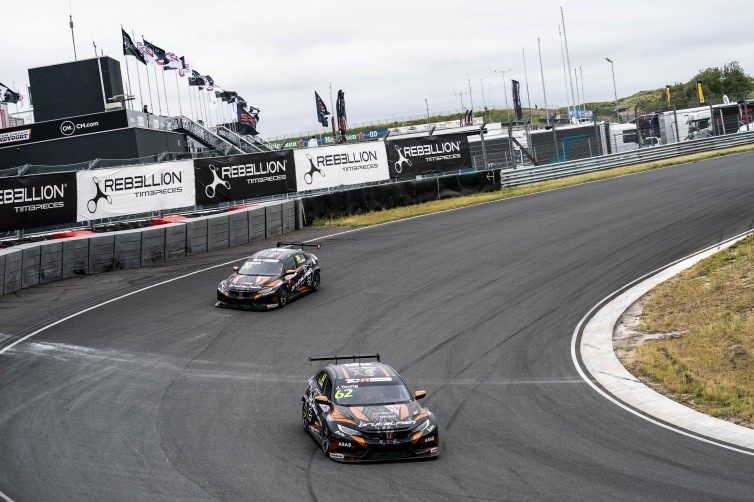 Jack Young (fastest): “That was very good. I didn’t think we had it at the end, the team was on the radio saying that Tom had gone quicker and so it was ‘go, go, go’ and I just managed to pull it out of the bag this time. P1 will be good for the race so we’ll see what happens, hopefully it’ll all go well. I thought my first lap would be good enough for pole and so we would have another set (of tyres) for the race but then I heard from the team that Tom had gone quicker and so I thought ‘oh no, here we go’. I can’t complain – all the hard work the team has put in, especially after the disappointment in France, so to come back like this is very good. I think the race will be a bit messy as it’s so tight here and the banks are like NASCAR, but I really like this track and so I’ll be pushing for sure.”

Tom Coronel (2nd): “To be on the front row is really good, but on home ground you want to show that you know the track really well. I think I did very well – the team said ‘great, P1’ but they forgot that Young was still behind, he was still pushing and he took the pole, but the front row is still good; it will be an interesting race and I’m ready. Despite the changes to the track, it’s still difficult to overtake here but of course I’m going to try! It will be a good race, that’s 100% sure. I don’t know where the Honda is good compared to the Audi because I haven’t really driven behind one. I saw on the sheets that they are fast on the straights, so I will have to do it in the midfield…”

Dušan Borkovič (3rd): “I said in Paul Ricard that I thought this weekend would be better, but this is Tom’s place remember! He knows the track really well, especially the new banking. We have seen the Honda is really fast over the last few races, so I think it will be difficult for Tom. Depending on my start, I will be aiming to finish in the top three; you know I like to fight but I will have to look after my tyres. I’m still learning about the Audi because the other cars I have driven have all been smaller. I have to see how I manage the tyres and maybe change my driving style race by race and next year, if I continue with Audi, I will be super-fast. The other good thing is that Tom will have 60kgs of ballast for the next race and I will have less. As teammates, we are all close and it will be good if we can have a big, fair fight between us and see if the others will be nice or not.”